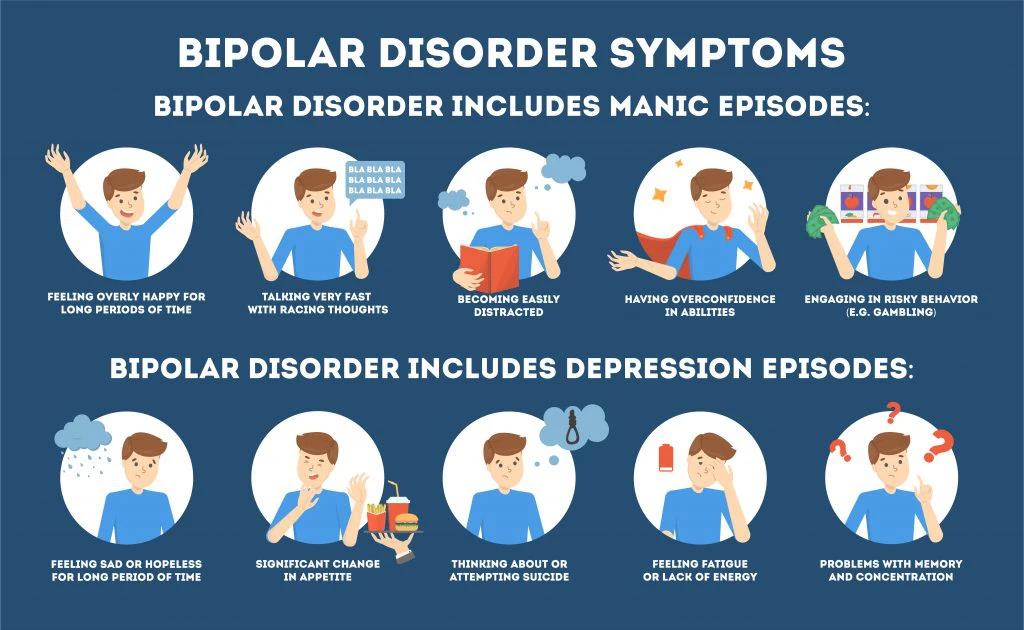 Mood disorders and depression are severe mental health conditions that can affect your thoughts, feelings, and behavior. You may not control your moods, and you may feel like life isn’t worth living. Depression is a common mood disorder that affects people of all ages and backgrounds.

Mood disorders can start at any age. They often develop from a complex set of risk factors, including:

•Your genetic makeup and family history

•Physical health problems, such as those related to the brain, thyroid, or other organs

•Drug use or abuse—including prescription medications and marijuana

•A history of trauma or violence. It may include physical abuse, sexual abuse, bullying, and exposure to violence in the media

Mood disorders also can be associated with other mental health problems such as anxiety and substance use. For example, many people who have depression use drugs or alcohol to cope with their symptoms.

This article provides a general overview of mood disorders and depression.

What are The Types of Mood Disorders?

There are several types of mood disorders, including:

•Major depressive disorder (MDD) is a severe and disabling form of depression. MDD affects nearly 14 million American adults in any given year, but it can occur at any age, including childhood. Children may have severe mood swings or irritable rather than sad moods, which can sometimes be challenging to differentiate from attention-deficit/hyperactivity disorder (ADHD).

•Other specific types of depression, which specialists may diagnose if your symptoms don’t meet the criteria for other types of MDD. These include:

How Is Mood Disorder Diagnosed?

Many mood disorders are found by chance during routine health care checkups or blood tests for other conditions. Other times, friends or family members may observe your symptoms and encourage you to check for a mood disorder.

A mental health professional, such as a psychiatrist, psychologist, psychiatric nurse practitioner, social worker, or counselor, generally diagnoses mood disorders using established criteria in the Diagnostic and Statistical Manual of Mental Disorders (DSM), published by the American Psychiatric Association. The DSM provides a common language and standard criteria for classifying mental disorders and is used by mental health professionals in the United States and internationally.

The diagnostic questionnaire that your doctor or mental health professional may use to assess mood disorders is the Hamilton Rating Scale for Depression (HAM-D). This tool helps them learn about your symptoms and determine whether you may benefit from further evaluation and treatment.

How Is Mood Disorder Treated?

Therapeutic approaches for mood disorders range from medicines or supplements to lifestyle changes such as diet or exercise to forms of psychotherapy.

Medications used to treat depression include:

•Atypical antidepressants. Talk with your doctor about the potential side effects of any medication you take.

Medications used to treat bipolar disorder include mood stabilizers that help regulate the highs and lows of manic-depressive illness; they are not antidepressants but may also relieve depression or anxiety during both phases of the disorder. Mood stabilizers include anticonvulsant medicines (such as carbamazepine, lamotrigine, or divalproex sodium) or atypical antipsychotic medicines.

Generalized anxiety disorder is a condition in which your worries overwhelm you, often causing physical symptoms and disrupting your daily life.

What are the Tell-Tale Signs of Mood Disorders?

Moods are the emotional states that color your day. They range along a continuum from euphoria or elation to depression or sadness. People with mood disorders suffer from extreme, persistent, and significant shifts in their emotions.

Mood disorders are much more than just “the blues”—they’re medical conditions that require treatment to restore your emotional stability and quality of life. Normal feelings of sadness are part of life—they ease up after a short while. But when you’re depressed, you feel sad almost all of the time, even though life events may have happened that should make you happy.

How Can you Tell If a Loved One Has Mood Disorders?

Family and friends can often see symptoms of mood disorders. But sometimes, the signs aren’t so obvious—or they don’t want to believe that a loved one has a severe condition.

If you observe these warning signs, encourage your friend or family member to talk with a doctor about an evaluation. These signs include irritability, anger, and frequent temper tantrums.

Many mood disorders are found by chance during routine health care checks or blood tests for other conditions. Other times friends or family members may observe symptoms and encourage you to get checked for a mood disorder.

The diagnostic questionnaire that your doctor or mental health professional may use to assess mood disorders is the Hamilton Rating Scale for Depression (HAM-D). This tool helps them learn about your symptoms and determine whether you may benefit from further evaluation and treatment.

Extremely sad most of the time; feeling slowed down in physical movements and thoughts; having trouble concentrating; insomnia (difficulty sleeping), change in appetite, psychomotor agitation (restlessness); avoidance of social situations; thoughts of death or suicide.

Symptoms of bipolar disorder: Severe highs (mania) and lows (depression). With mania, you feel overly excited or irritable, have difficulty sleeping, talk nonstop, are full of energy and may take on too much. When in a depressive phase, you feel extremely sad or hopeless, have low energy and lose interest in everyday activities.

Most people experience periods of sadness throughout their lives like seasonal affective disorder. But severe depression is characterized by feeling extreme sadness, despair, loneliness, or anxiety for weeks at a time—you may benefit from talking to a mental health expert about treatment options.

Depression is a common and severe mood disorder that affects how you feel, the way you think and act and can impact your health. Depression symptoms vary from person to person and may include changes in sleeping or eating patterns, loss of interest in activities once enjoyed low energy or fatigue, difficulty concentrating or making decisions, and feelings of worthlessness or guilt.

The symptoms of depression may look different in children, adolescents, and young adults. Symptoms may even vary by age group. For example, younger children are more likely to have separation anxiety—fear or distress when separated from parents—whereas older children might feel angry or irritable.

Treatment options for depression include talking therapies (psychotherapy or counseling), medication, or a combination of both.

What is Bipolar Disorder?

Bipolar disorder (also known as manic-depressive illness) causes unusual shifts in mood, energy, activity levels, and the ability to carry out daily tasks. Symptoms of this disorder are severe. They are different from the routine ups and downs that everyone goes through from time to time. Bipolar disorder symptoms can result in damaged relationships, poor job or school performance, and even suicide. But doctors can treat bipolar disorder, and people with this illness can lead full and productive lives.

• Changes in eating habits, such as eating too much or too little

• Having thoughts of death or suicide

How is Bipolar Disorder Treated or Addressed?

Bipolar disorder is usually treated with medication and psychological counseling (psychotherapy) to help people who have this illness lead full, productive lives.

Therapy teaches you how to:

What is Persistent Depressive Disorder?

Persistent depressive disorder (PDD) is a type of depression that occurs for two years. Its symptoms are similar to major depression, including feelings of sadness, hopelessness, or worthlessness; loss of interest in daily activities; changes in appetite and sleep patterns; difficulty concentrating; and thoughts of suicide.

People with PDD have episodes of major depressive disorder but do not have manic or hypomanic episodes.

How is Persistent Depressive Disorder Treated?

Some people with the disorder can manage their symptoms by making healthy lifestyle changes, such as eating right, exercising regularly, getting enough rest, reducing stress, and spending time outdoors. If these steps are not enough, antidepressants may help.

Anyone with this condition should be under a doctor’s care. Treatment for this condition is more effective when it begins early. Some people who have depressive disorder also benefit from psychotherapy, which can help them learn healthy coping skills for daily life.

What is Major Depressive Disorder?

Symptoms range from mild to severe. Mild symptoms may cause few or minimal problems in a person’s life, while severe symptoms can seriously affect working and establishing relationships with others.

The depressive disorder often develops slowly over several months. However, it affects them suddenly when they experience a very stressful event in some people. These major depression triggers can include:

• A death in the family

• Divorce or a breakup

• Health issues, such as diabetes or cancer

Depressive disorder can cause a person to have feelings of sadness and worthlessness that interfere with work, study, eating, sleeping, and enjoying once pleasurable activities.

How is Major Depressive Disorder Treated?

People with severe depressive disorder may need to be hospitalized. People who have this level of depression and do not receive adequate treatment may have thoughts about suicide or attempting suicide.

Mood disorders depression and bipolar disorder may contribute to other chronic health conditions.

For example, research has found that untreated depression is linked to higher heart disease and stroke rates. The good news is—the same treatments for mood disorders may improve heart health.

What are the Warning Signs?

If you notice these warning signs in yourself or others, talk to a healthcare professional as soon as possible. Keep in mind that most people with depression are not suicidal, and treatment can help reduce suicide risk.

What Can You Do?

If you notice the warning signs of a mood disorder in yourself or others, talk to a health care professional as soon as possible. If you think you may hurt yourself or attempt suicide, call 911 or go to the nearest emergency room.

In the modern world, it’s not uncommon for people to experience a bout of depression. It is especially true in young adults who may be going through a tough time or struggling with life changes. The good news is that there are plenty of ways you can improve your mood and get back on track! You should always talk to a health care professional if you have thoughts about suicide or self-harm, but in the meantime, here are some quick tips:

Make an effort to do something you enjoy every day

Eat healthy, balanced meals, get enough sleep and drink plenty of water. Many people also report that dietary supplements such as fish oil have helped improve their mood.

Want to talk to someone who can help?
TO GET HELP NOW, CALL US.